HOW AND WHEN THIS CHARGER CAME TO BRAZIL? WHO KNOWS?

(Article Originally Submitted to Wincharger.com in 2006)

As an electronics engineer and an old radio repair/collector one of my dreams (thanks God we have a lot of this) was to have an antique wind charger. I knew it would be very difficult to bring such item to my country specially due to packing/transportation costs and the agreement of a north american vendor to have it shipped to Brazil.

One day I could not believe what I was seeing. Right in front of me an old disassembled 6 volts wincharger! I was in Itu, a city closed to where I ive, in the state of Sao Paulo. The owner of the antique store said it was complete  except for the propeller. In reality there was a piece of the propeller. Parts were very rusty although they had been sand blasted some time ago.

I began removing the rust. I spent many hours doing this task. I did not want to have it sand blasted again. After that, parts received a coating of a "rust remover" and after drying, several coats of primer paint and finally black paint. I could see shiny parts. I was very proud of that. Tail letters were done by a lettering man with the aid of a computer.

Now it was time to assemble the charger but I had no reference. What to do? Use my best judgment and/or go to the Internet? By clicking "wincharger"on Google I found out a beautiful site www.wincharger.com. Now I had an excellent reference!I assembled the charger, with exception of its front part because there was no propeller as can be seen in the photo below. 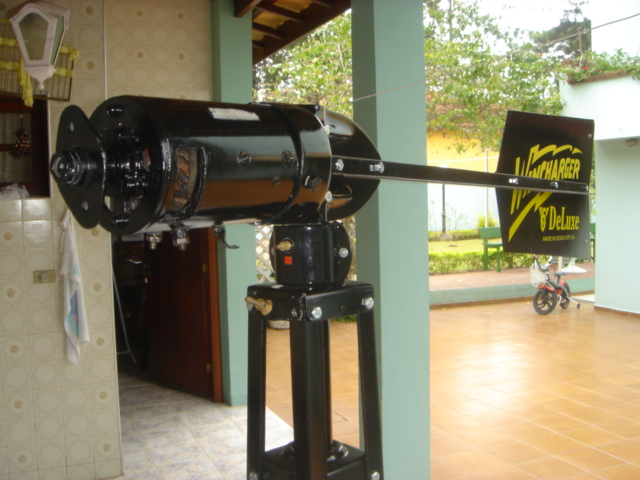 I requested two quotes from experts to make the propeller. As prices were high and I did not feel confident on the final result I took a decision. I will make my own propeller. Using photos from the wincharger site, the piece I had, with the help of Gus Stangeland and Terry Bryant, who sent me a drawing with a couple of the propeller dimensions and a drilling machine equiped with a sanding fixture I started my adventure: for the first time try to make a propeller. It took me four hours to make it and an additional hour to finish it by sanding and apply varnish. Oh! I liked what I did! I went back to www.wincharger.com printed one the propellers photos done by Gus from where I cut and glued the oval logo of the propeller. It looks like an original propeller!

Finally I checked its operation. Great! It works! Next I purchased an instrument panel from Gus.  The photo below shows the finished wincharger and my grandson. 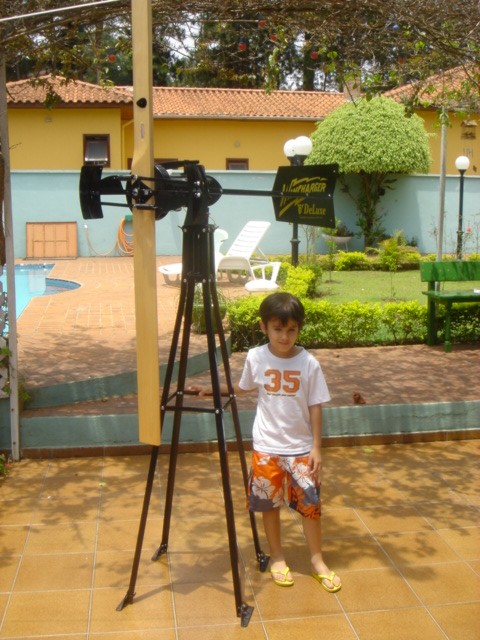 Now guess where will this charger be placed? It will be kept inside my house as a decorative piece.